Beloved Losers - One and All

Jesus loves sinners.  Are you a sinner?

I am a prodigal son who rebelled against my heavenly and earthly fathers in every way that my imagination could conjure.  I have been blessed to have been so loved by both fathers that I am extra grieved for my sins against both.  Yet, I am more of a disappointment to myself than to them.  The shame that I feel is not because they have condemned me, but because I am embarrassed of the stupidity that I have done... and continue to do.  Have mercy on me O Lord. 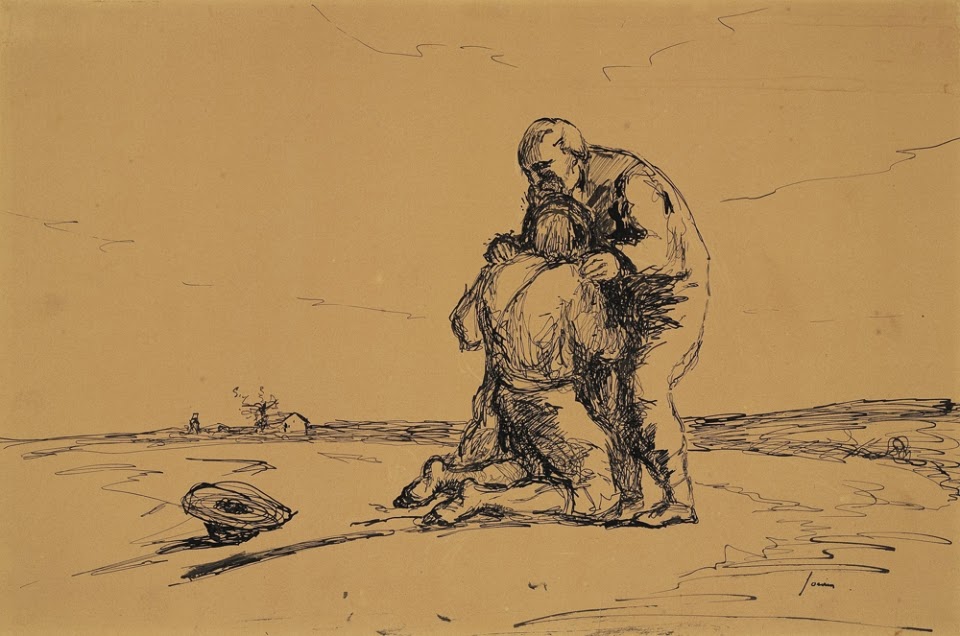 Jesus said in Mark 2:17, "Those who are well have no need of a physician, but those who are sick. I did not come to call the righteous, but sinners, to repentance."

Are you a good person or a sinner?

I hear so many people say, “I am a good person.”  I have heard people say that they do not need to come to church because the church is full of hypocrites and, “I think that I will go to heaven because I am basically a good person.”

Luke 15 tells us a story about two brothers and a father.

First, the parable of the “Prodigal Son” since we know this one the best.

There was a young man who was restless on his dad’s farm and he decided that he wanted to go and see the big city and live the good life.  So he asked his father for his share of the estate, took it and went off to a foreign land and lived the good life. Cigarettes and Whisky and wild women…

Young Mr. Prodigal wasted everything (after all, that’s what prodigal means – wasteful).  He blew his cash at the Casino and on fast women and so forth.

He invested poorly. Then the market dried up and there was a famine in the land.  So, this nice Jewish boy got a job taking care of pigs, which by the way are animals that were unclean for Jews to eat and probably unclean to touch.  This kid even wished that he ate as well as the pigs did )he was probably working off debt).

One day, he was especially hungry and he had a thought that maybe he could go home and work on Dad’s farm because even the hired hands on the farm had plenty to eat.  He decided that he would give his dad this little speech, "Father, I have sinned against heaven and before you, "and I am no longer worthy to be called your son. Make me like one of your hired servants." So he headed home.

Before he got to the gate, his father ran out, threw his arms around the boy’s neck and kissed him. The son started his speech, but the father ignored it and called to the servants to kill the fatted calf, bring me my robe and ring, MY SON IS HOME!  The son must have been utterly amazed and stupefied.

Now for the parable of the Loving Father…  One day a good father was hard at work and his son came to him and said, “dad, I am tired of living on the farm, I want to see the bright lights of the big city, give me my inheritance now and I will go and become like Donald Trump.”  The father was sad to see his dear child leave him, but He knew that he could not keep his son against his will, so he consented.

His son packed his bags, took his money and left town.  Day in and day out the loving father would watch the road for some sign of his boy, but nothing, how his heart ached for missing his son.

With this the loving father ran down the road as fast as he could and threw his arms around his son and rejoiced that he was not dead, but rather has come back to live with us!”

The son started to apologize, but the father was so happy to see him, he didn’t even hear it. The father called for the servants to kill the fatted calf and bring his best robe and ring.
REJOICE MY SON WHO I GAVE UP FOR DEAD IS ALIVE AND IS HOME!

The third parable, the parable of “The Jealous Brother,” goes something like this…  One day my idiot brother took his share of the farm, (which made my life that much harder) and ran off to find a bunch of fast women and the loser became a crack head.  The moron went off and blew all his money and now he has come home and wants to take what’s mine.

As if this is not bad enough, now dad is treating him better than me.  He always was Dad’s favorite.

Who is who?  We are either the wasteful son or we are the jealous son.  We have either squandered our lives with our sinful wasteful lives or we have thought ourselves to be a truly good person and everyone else besides us are the problem.

In Jesus’ day, the Jews, the Pharisees and Sadducees in particular would never associate with the sinners and they believed that they had noting to repent of.

There are many Christians today who are Pharisees, we even had some in our churches today.  In their estimation, they are okay with God because they do not drink, cuss, smoke, do drugs, go to rated R movies or associate with sinners who do.

They are just fine in their own eyes because they would never do any of those sorts of things. Because of their good behavior, they will surely go to heaven.

Some of us may fit in this category, and the truth be told, if you are, you are in serious trouble because you are trying to save yourselves with your so called good works that are polluted with the stench of your sin.

Then again, perhaps you are the prodigal son. You have done some really, really stupid stuff in your life, stuff that you do not even like to think of yourself, let alone confess.

Perhaps you have been involved with extramarital sex or drugs, perhaps you have some other sort of addiction, pornography or something else that you have put before God, just go through the 10 commandments, pick one – they are all equally sinful and equally damning.

If this is you, there is good news.  When you have had enough of wallowing in the filth of your sin, you can always come home to your loving Father.  Sometimes like those who suffer addiction we who are given to wandering away from the baptismal grace that we have been given, need to hit rock bottom before we can figure out that we have totally messed up our lives and return to the Lord.

Of course we all know who the Father is, it is our Father in heaven who sent His only Son to pay the price for our sins.  He is the Father who waits patiently for His children to come home so that He can lavish His love on them.

Jesus has come so that we might be returned to the favor of our Father.  He has paid the price and punishment of our wasted sinful lives for us.  He has lifted us out of our slimy pit and set our feet on solid ground (Ps. 40)

Joel 2:13 says  “So rend your heart, and not your garments; Return to the LORD your God, For He is gracious and merciful, Slow to anger, and of great kindness; And He relents from doing harm.”

Dear, fellow prodigal brothers and sisters, you have a loving and kind Father, who loves you so much that before you can even begin to apologize, He has already forgiven, forgotten and accepted you home into his house as his dear beloved child and He has prepared the Feast of the Lamb in His Kingdom for you and awaits your entrance.

Have joy of this today and everyday.
In Jesus’ Name
Amen

Follow us on Twitter: @200proofgospel Also be our friend on Facebook 200 Proof Gospel!
FOLLOW THE 200 PROOF GOSPEL ON PODBEAN http://reverendme.podbean.com
ALO ON TUNEIN RADIO   http://tunein.com/radio/200-Proof-Gospel-p905025/
Craig can also be heard at www.godwhisperers.com
also
Follow our missionary travels at www.craigandpaula.org
Posted by Craig Donofrio at 3:04 PM