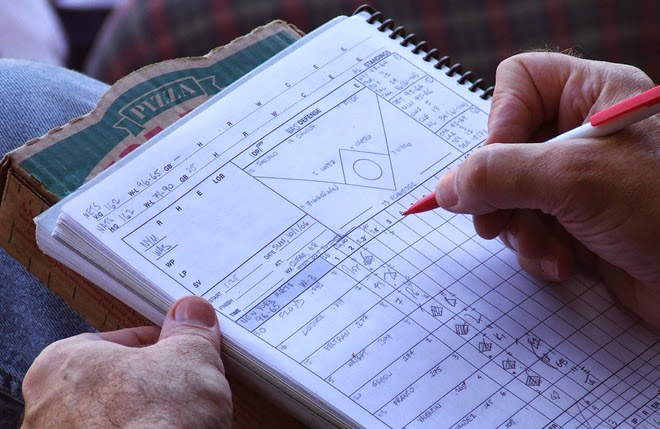 Regardless, we had fantastic seats and there was a nice old guy who sat right in front of us.  He was there every game, smoking his White Owl Cigars and keeping score.  He was an amazing guy who brought his scorebook to EVERY game.  He could tell you who did what and when going back several seasons.  He was diligent about recording every pitch, every play, every game in his scorebook.  To this day, when I smell cigar smoke, I am transported back to being 12 years old, looking over his shoulder and learning all of the symbols and abbreviations to keep score.  It seems like it was just yesterday that I was cheering for the CALIFORNIA Angels (boy do I have a bone to pick there), eating hot dogs and waiting for a foul ball to fly my way… still waiting.

We are all scorekeepers.  We have long memories when it comes to who wronged us.  We hold grudges.  When we have been wronged and “that person” or “those people” don't apologize, we often feel justified in not forgiving them, after all, they never asked for forgiveness.  Our memories go back many seasons and whereas the facts may be skewed over time, we know one thing – THAT PERSON HURT ME AND I WANT TO HURT HIM or HER BACK!  After all, it is only fair that they should get theirs.
Then there are those with tender consciences who have hurt others.  The demons of their past visit them, often in the quiet hours.  They continue to flog themselves, even if they have apologized to those whom they have hurt, even if those people don't even remember the event, it haunts them.  The instant replay is caught in an endless loop of accusations and they live it over and over again.

Thanks be to God, for the sake of Jesus Christ that, contrary to many religious notions, He doesn’t have a score book, only a Book of Life.

When bad things happen, we often think that the Divine Statistician is giving us payback for something that we have done, that the score must be settled.  Whereas there are natural consequences for many of our sins, like being dumped cold because you cheated on your spouse, or being punched in the nose for cheating with someone else’s spouse, God is not in the game of settling the score.

The score was settled once and for all as Christ took the sins of the world onto Himself in that “Glad Exchange” (www.200proofgospel.com/2015/03/its-not-fair-glad-exchange.html).   He atoned for all of your sins there on the cross and He threw the scorebook into the pit of Hell.

The baptized are wiped clean, coated in Christ and now utterly blameless because the One who created the Heavens and the Earth in six days, who rested on the seventh, has recreated you on the 8th day.

Bless the LORD, O my soul, and all that is within me,
bless his holy name!
Bless the LORD, O my soul, and forget not all his benefits,
who forgives all your iniquity,
who heals all your diseases,
who redeems your life from the pit,
who crowns you with steadfast love and mercy,
who satisfies you with good so that your youth is renewed like the eagle's.

The LORD works righteousness and justice for all who are oppressed.
He made known his ways to Moses, his acts to the people of Israel.
The LORD is merciful and gracious, slow to anger and abounding in steadfast love.

For as high as the heavens are above the earth, so great is his steadfast love toward those who fear him;
as far as the east is from the west, so far does he remove our transgressions from us.
As a father shows compassion to his children, so the LORD shows compassion to those who fear him.
For he knows our frame; he remembers that we are dust.
As for man, his days are like grass; he flourishes like a flower of the field;
for the wind passes over it, and it is gone, and its place knows it no more.
But the steadfast love of the LORD is from everlasting to everlasting on those who fear him,
and his righteousness to children's children, to those who keep his covenant
and remember to do his commandments.
The LORD has established his throne in the heavens, and his kingdom rules over all.

By the way - the song went "CALIFORNIA ANGELS A-Okay!"
Los Angeles Angels of Anaheim - Phooey ! They're in Orange County, not Los Angeles!
FOR CRYING OUT LOUD!  :-)

Posted by Craig Donofrio at 1:17 PM