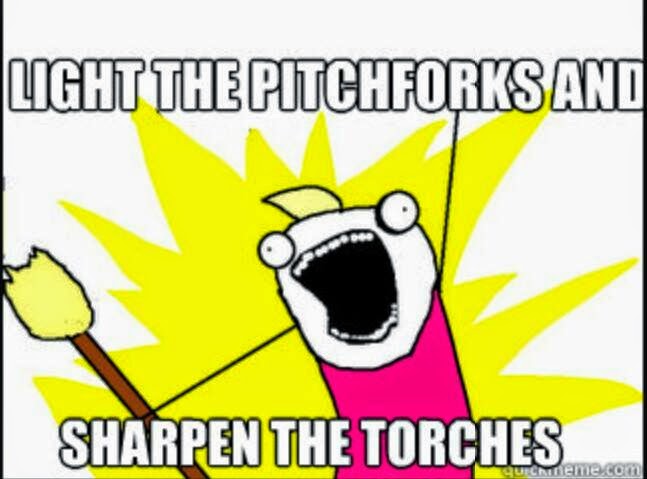 You cannot out sin God’s grace!

This is one of the most liberating statements in Christendom, but also perceived by many as the most dangerous.  It isn’t bone-crushing law that makes the church angry, it is the completely free Gospel that will make the faithful round up the pitchforks and torches.

The problem is that the law that they hear isn’t bone-crushing enough and isn't “FOR THEM.”  When the law is proclaimed in all of its severity, it is often perceived as the law for “those people.”
“Those homosexuals are an abomination.”
“Those drug addicts and alcoholics are evil to the core.”
“Those rioters in Ferguson are the dirty, violent, mindless villains of our generation.”

One of the reasons that most people in the church are not completely thrilled with this announcement of the dangerous, radical, 200 Proof, no holds barred Gospel -  is that they don’t understand how utterly rotten and needful of it they are.  When we come to grips, even a little with our utter sinfulness and incapacity to do even the least good work without Christ doing it in our stead and through us, we will never lay hold of the amazing sweetness of God’s grace in Christ Jesus.

Through the perfect life, atoning sacrifice and glorious resurrection of Jesus, the sins of the world were answered for and consumed in our Savior.  The sins of the whole world, from Adam to the last man standing, all consumed.  This is the radicality of the Gospel, that every sin, ever, is forgiven… for sinners.  But what of those who have conned themselves into believing that they are no longer sinners?  They have neutered the law enough in their hearing that they think that they are actually doing it.

The “for you-ness” of the Gospel cannot exist unless there are sinners that need God’s grace, for you, for them, for all.  The truth “Of  You-ness” of the law turns sinners upside down and empties them of their false notions of their goodness.  God empties us of ourselves, our sinful selves, the law destroys, it kills and IT KILLS YOU! The Peccator (sinner) in you is being destroyed and yet, it keeps popping up over and over again.  The sinner will not be done away with finally until our bodies stop breathing on this earth.

To go even further, the gift of Law and Gospel comes in the waters of Holy Baptism and shoves the old Adam even further under the death of the water.  Our God is not in the death business, but the life business.  He does not leave death alone without a resurrection, so He raises us to a new life, one lived as a justified saint.   The Word of God and some tap water is an amazing thing when our God is at work.

Back to the idea of not being able to out sin God’s grace.  This statement horrifies the sinner who justifies him/herself, because it is heard as a license to sin (but mostly for "those people" to sin). If you can’t out sin God’s grace, then you’re saying that people can do whatever they please.  This is libertine license in their minds, and it is this way because they haven’t been emptied of themselves, of their false notions of their own goodness.   To one who hears it like this, it sounds like it is okay to coddle and pamper our pet sins and God is just hunky-dory with it.

To the one who confesses his / her sin and confesses that there is nothing good in or about anyone aside from Christ, the saying that we cannot out sin God’s grace is nothing less than a proclamation of the superlative nature of God’s infinite, amazing, forgiveness of sins that we have in Christ Jesus.

The self-righteous says, YOU CAN’T SAY THAT!  It tells those people that

they don’t have to change!   The broken sinner simply bows their head lower in reverence to their God and says, AMEN! Thanks be to God for His more than infinite mercy for our infinite sin.

You cannot out sin God’s grace, do you hear this statement as Libertine license or as Holy Absolution?


Thanks be to God that He blesses us and redeems us, even in the midst of our sin.

St. Paul says it this way…
“Therefore, as one trespass led to condemnation for all men, so one act of righteousness leads to justification and life for all men. For as by the one man's disobedience the many were made sinners, so by the one man's obedience the many will be made righteous. Now the law came in to increase the trespass, but where sin increased, grace abounded all the more, so that, as sin reigned in death, grace also might reign through righteousness leading to eternal life through Jesus Christ our Lord.
What shall we say then? Are we to continue in sin that grace may abound? By no means! How can we who died to sin still live in it? Do you not know that all of us who have been baptized into Christ Jesus were baptized into his death? We were buried therefore with him by baptism into death, in order that, just as Christ was raised from the dead by the glory of the Father, we too might walk in newness of life”
- Romans 5:18 - 6:4 ESV