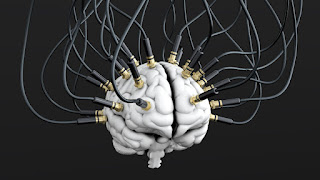 TMI - Too Much Info

We knew the brain was an amazing created gift, but it just keeps getting better - it makes your brain hurt to think about it.

This article , from the Daily Mail, is about how much more powerful it is than was previously thought.

"The human brain can store 10 TIMES as many memories as previously thought, says study."

Oh, there's a surprise!?! God was smarter than we thought?

Our brains are so complicated as they take electrical impulses, combine them with our sight, hearing, speaking, muscle movement and on and on and on, and then translate that information into thoughts.?. This is very heady stuff - too far above my pay grade.

From the Daily Mail article,

What does this have to do with our Lord Jesus Christ? He was the Creator, He is the one who was, is, and will be - the author and finisher of the world and even faith itself. He is the creator of the outrageous number of synapses that make up the brain. And science is only beginning to learn it.

It is mathematically impossible to crunch the numbers to figure out how much time is required for the kind of information that is cited above to come together by chance to move from the science fiction of a primordial soup to the human brain, let alone work with all of the other systems of our body.

See, I told you, your brain will hurt.

However, what us normal people really need is the gift from God to trust that God will provide all I need for my life and my many daily vocations. He gives the thoughts words and deeds through creation to provide for us.

When we fail in our callings or vocations, our daily jobs, we confess that we have sinned against this eternal creator. Still, the creator gives to us His only Son, who had a brain - who took the place of our brain, to be the perfect brain for our sinful brains. Christ has even saved our brains and endured the suffering our brains have produced.

So when things get disconnected in our brains from infirmities like depression or schizophrenia; from pain and cancer; from Alzheimers and our spouses and children, Christ has endured that suffering for you as well.

Just as in the beginning, is now, and in the end, Christ brings to us His new creation and perfection, now by faith, at our end the new heaven and earth. Creation is new in Christ and will come to full paradise when our synopses click their last earthly charge.

So, I guess we could say that, Christ "brained me" for my sin? Ok, too silly.

Follow us on Twitter: @200proofgospel Also be our friend on Facebook 200 Proof Gospel!
FOLLOW THE 200 PROOF GOSPEL PODCAST ON PODBEAN http://reverendme.podbean.com
ALO ON TUNEIN RADIO   http://tunein.com/radio/200-Proof-Gospel-p905025/
Craig can also be heard at www.godwhisperers.com
ALSO
Follow our mission work. www.craigandpaula.org
Posted by Unknown at 10:50 AM No comments:

The God Must Be Crazy!

It has been years since I have had an original thought, especially an original theological thought, which probably makes me a passable theologian.  This post is no exception.  It was Dr. Kevin Armbrust who got me off on this track and since he is a good theologian, I wonder from where he got the idea.

Ever since I have become a Lutheran, one of my all-time favorite texts to preach on is the Prodigal Son as found in Luke 15. One day, the youngest of two sons comes to his father and wishes him dead so that he could have his inheritance, RIGHT NOW!  Now, many fathers would find this a good cause to kick the brat out and take him out of the will, if not smacking the kid a bit first, but not this father.  Instead, this crazy old man liquidates half of everything that he owns, gives it to the son and wishes him well.

We know what happens next, cigarettes and whisky and wild, wild women.  Next thing we know, Junior is broke and starving, to the point where he is most likely working off debt as he is feeding pigs and jealous of their slop.  So, of course, he decides to go home, confess his sins against father and God and hope to receive a billet in the servant’s quarters.  He knows that dad treated the slaves better than what he’s getting.  The camera pans to home…

There sits the father on the porch, day after day with his binoculars, just watching the road.  The farm is being run by number one son, but he doesn’t care much for that.  The old guy just sits and watches the road.  Whenever anyone came down the road, he would stand up and say, “Is that him, is that him?”  Day after day, week after week, he watches.  Time after time, he’s disappointed, but he watches.  This behavior is pathetic and well beneath the dignity of such a wealthy and prominent member of society.

One day, he sees someone off in the distance and like a watch dog, he jumps to his feet and says, “Is that, my son?  Oh Lord let it be him!”  This one is different; he has a familiar gait, the height is right, he seems awfully skinny, but this one, “IT’S HIM!”

The crazy old man, lifts up his robes, exposing his legs (shameful in this day and age), and he runs down the road (also shameful, servants run, not dignified masters of estates).  As he draws near, the boy started to mumble something, but he doesn’t care, MY SON IS ALIVE, HE WAS DEAD, BUT HE’S ALIVE!  WHAT A DAY, WHAT A DAY!  He embraces his son and through his tears, he calls out to the servants who had followed him, Quickly, get my best Armani robe and put it on my son, HE LIVES!   To another, he yells, get my ring, the one that is a symbol of everything that I own and all of my authority, put it on the boy, HE LIVES!  To another, he yells, kill the best animal we have and prepare a feast, MY SON IS ALIVE! 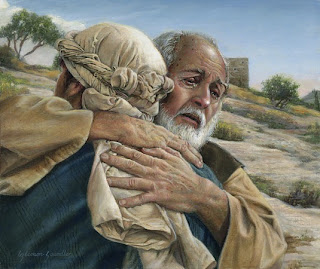 Everyone at this point is staring at the crazy old man.  This kid spat in your eye, squandered everything, wished you dead, comes home smelling like pig crap, and you’re giving him everything – AGAIN?  ARE YOU CRAZY?

Yes, God is that crazy, He’s wild, He’s nutty, and thanks be to God, he is crazy and nutty like this for you and me.

In our sin, our self-serving idolatry, we constantly spit in our Father’s eye, we wish Him dead so that we could play god.  We mock Him; we squander what he has entrusted into our hands and when we make a wreck of our lives when we return to His house with our heads hanging low (hopefully every week), He points us to the feast of the Lamb of God, who was slaughtered to cover our sins.

God and the angels rejoice whenever we confess our sins and even before we can get the words out of our mouths, we find that we are clothed in the perfect robes of righteousness that we were presented in the waters of Holy Baptism, and here, the Father, the Son and the Holy Spirit rejoice and call out the insanely good words… “My son (you) was dead, BUT NOW HE LIVES!” With this, all of heaven and the whole Church rejoices.  Another prodigal has come home... again and again.  This is the life of the baptized, daily repenting and daily forgiven even before we can ask.

God, by our standards, is crazy – THANKS BE TO GOD!

Posted by Craig Donofrio at 12:15 PM No comments: