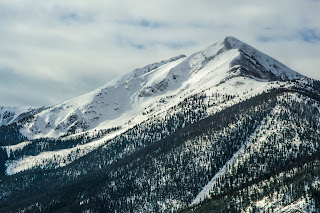 Have you heard the axiom, "all religions are
different paths to the same place," or "all religions worship the same god," and so on?  This sentiment has gained ground in society that has become all about acceptance.  The image most often associated with it is a majestic mountain, and we are supposed to imagine each religion as a different way to hike up to the summit.  Each trail up provides a different view along the way, but they all eventually lead to the same place.  Is this truly how God works though?  Has he given us multiple ways to climb to the summit of His holy mountain?

On a certain level there is truth to the idea of a common thread among most religions.  Most religions are a striving, a working to obtain.  The summit of Hinduism is moksha, the escape of suffering through breaking the cycle of birth and rebirth.  Buddhism's summit is nirvana when suffering is ends through overcoming desire.  Taoism and Confucianism both reach the satisfied with the deaths of the wicked and desires that all come to the knowledge of the truth and be saved, and what is that truth?  That Christ, the unblemished Lamb of God, untainted by sin, came into our world and took our flesh upon Himself in order to satisfy the Law of God.  In His life He fulfilled each and every commandment of the Father, never breaking a single one, and in His death on the cross He took the sin of the world upon His shoulders, swallowing up the wrath of God that was designated for each and every one of us.

No, we are not a people of a mountain, but people of a tomb.  For Christians, however, as our eyes turned from the grotesque scene of death and decay in the tomb within to the wondrous tomb of Christ without, something wonderful happened.  Those bitter grapes of God's wrath that Christ swallowed on our behalf were fermented into the sweet, precious wine of salvation that flows to us now.  For the tomb of Christ did not remain occupied as He rose again three days later, and after He rose He ascended.  When He ascended He became our high priest and intercessor before the Father and sent to us His Holy Spirit.

With our eyes fixed on Christ and His empty tomb, His grace has flowed to us through His Word and Sacrament.  In His grace the tomb within each of us was cleansed and transformed into a shrine, a temple of the Holy Spirit where God dwells as we await our own resurrection.  "For if you confess with our mouth that Jesus is Lord, and believe in your heart that God has raised Him from the dead, you too will be saved."  Christianity is not a religion of man about how we can do to climb the summit, but instead it is the religion of God that says that Christ has already climbed it for you.  That makes all the difference.
Posted by Pastor Roth at 12:53 PM